Living Big in a Tiny House: Exploring small-space design projects from New Zealand and around the world by Bryce Langston 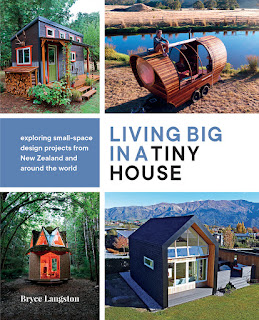 “I’ve travelled the world seeking examples of cleaver small-space design and delving into the lives of the people who inhabit these ingenious structures… These homes may be small but within their walls it’s easy to find a lot to love.”

Five years ago, while living in Auckland, Bryce Langston was looking for a way to have a permanent home while living costs just kept rising. While searching online, he came across an image of a tiny house on wheels which planted a seed in his mind that was too hard to ignore. Bryce started to explore the concept of tiny living and begun to share what he was learning on his YouTube channel ‘Living Big in a Tiny House’. From there he was inundated with demand for tiny house content. His channel evolved and he began to travel around New Zealand, and later on around the world, viewing tiny homes and talking to their occupants about everything from the lifestyle choice to process to quirky design elements. His channel has exploded and he is now nearing on two million subscribers.

Living Big in a Tiny House is an extension of his YouTube channel. The book begins by sharing what he has learnt while exploring downsizing. It includes design essentials, off grid living, how to live tiny and costs involved in living tiny. The rest of the book explores different tiny dwellings around the world which are broken up into three categories: on the road, grounded and parked up. Each dwelling is photographed beautifully alongside a write up about the home and its inhabitants.