The Gunners by by Rebecca Kauffman 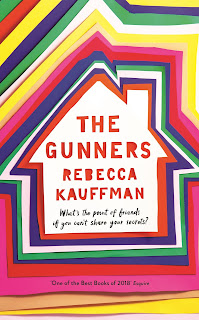 As you begin reading The Gunners you are quickly swept into the world of six-year-old Mikey Callahan on the day he discovers he has no sight in one eye. Mikey’s father, ‘a man of dark and quiet emotions’, doesn’t follow up with an eye test, and Mikey carries on as before. He lives an undemanding life, not really engaging with the kids around him - until he meets Sally on the bus and the two become friends. Live-wire Alice invites Sally and Mikey to join the Gunners, a group of kids who hang out together in a run-down house with a reputation for being haunted.

The story flips forward twenty-plus years as Mikey learns that he’s slowly turning blind and soon after that, the bombshell that Sally has killed herself. Sally had cut herself off from her friends when they were sixteen, and the group broke up. Oddly enough, Mikey, Sam, Jimmy, Alice and Lynn still keep in touch with occasional emails.

The five friends decide to meet up after the funeral, and feelings of guilt emerge as each tells the story of their relationship with Sally. Long hidden secrets which have caused lingering distress bubble up over the evening, although an even bigger secret is saved until last.

The Gunners seem an unlikely bunch of friends – they are all so different, although perhaps it is that they are all needy in some way that is the glue that keeps them together. Kauffman does a terrific job of describing childhood friendship in a way that is instantly recognisable – the dares, the odd bursts of jealousy, the one-upmanship.

But it is Mikey, the really nice guy who has so few people in his life who really pulls at the heartstrings. Mikey is the main narrator in the story, and we follow his solitary existence, his awkward relationship with his father, his talent for cooking. I devoured this book, wanting something wonderful for Mikey who is so deserving of happiness without trying to find it for himself.

Rebecca Kauffman’s writes with apparent simplicity, with scenes that interconnect to link the different experiences of Mikey and his friends, and the past to the present. With memorable characters and well developed themes around guilt, loyalty and the true meaning of love, this novel gives you lots to think about long after you turn the last page.

Catalogue link: The Gunners
Posted by Staff at 13:55