On Turpentine Lane by Elinor Lipman 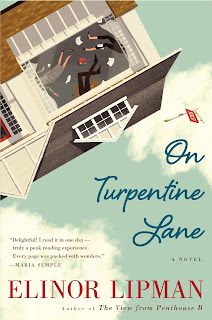 Laura Lipman is an old hand at witty and charming comedies of manners. Her first novel, Then She Found Me was made into a movie starring Helen Hunt, Bette Midler and Colin Firth. On Turpentine Lane is Lipman’s eleventh book and I can see how her stories would translate well to the screen with their snappy dialogue and quirky characters beset by difficulties.

The story takes us into the world of Faith Frankel, recently returned to her home town and working at her old school, writing thank you letters to benefactors. Yes, apparently, there are jobs like that. Her fiancé is on a walking journey across the United States, supposedly to find himself, but seems to be finding a lot of attractive women if his social media posts are anything to go by.

Faith decides to buy a house, you guessed it, on Turpentine Lane - a run-down, do-up with a chequered history, including rumours that the previous owner murdered her husbands by pushing them down the basement stairs. And when her father finds photographs of babies in the attic that seem to have died, Faith feels more than a little unnerved.

But the mystery surrounding these discoveries is a helpful distraction from problems at work – being falsely accused of fraud – and with her family. Faith’s father has left her mother to reinvent himself as an artist painting fake Chagalls, and her brother’s confidence with women has been sapped by a bitter divorce.

This is a close-knit Jewish family, where everyone has an opinion about everyone and everything and a tendency to interfere. This adds much to the humour as Faith and her brother plot to patch up their parents’ marriage, and there is plenty of heated discussion.

Faith has a lot on her plate, but fortunately help is at hand from Nick, her amiable and good-looking colleague, also having a few relationship problems of his own. The story bubbles along as Faith’s house turns into a crime scene and Faith has to deal with one drama after another, towards a warm and humorous ending.

On Turpentine Lane is a light, bright page-turner will have you chuckling as you read - surely just what is needed in times like these.

Catalogue link: On Turpentine Lane
Posted by Staff at 14:25