I Am, I Am, I Am: Seventeen Brushes with Death by Maggie O’Farrell 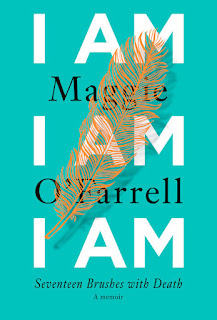 “I knew, in that moment, and perhaps for the first time, that I would one day die; that at some point there would be nothing left of me”

Maggie writes the story of her life based on the seventeen times that she was close to death. The chapters are named after the part of her body that the most damage either had been done or would have been done to, should death have occurred. Some experiences are common and could happen to anyone while others feel just that much more serious, closer to the end.

Death could be as close as if you had taken just one more step closer to the road as a massive truck swoops by. It could be as close to you as the time when Maggie was hiking alone and met a strange man. Her gut told her that something wasn’t right; years later she would find out just how right she was. Death could come in the form of childhood illness when no one expects you to survive. Or it could be coming for the family and friends that you love and care about.

As a first time reader of Maggie O’Farrell, I wasn’t too sure what to expect. I was surprised by how much I enjoyed this memoir. Although the subject matter seems dark and unforgiving, Maggie writes in such a way that you forget this and instead become carried away and invested in the people and their stories. This is a book I would highly recommend to anyone.