Everything Is Lies by Helen Callaghan 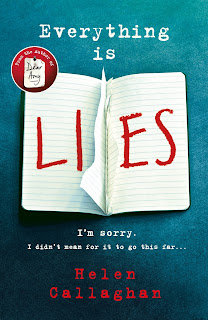 With a title like that, the reader knows to expect the unexpected – twists and surprises aplenty – like many books in this genre. Not only are there family secrets on a grand scale, you are caught up in a plot where you just don’t know who can be trusted. How can you when everything is lies?

At the start of the book, twenty-six-year-old Sophie makes a shock discovery when she visits her parents to find her mother dead and her father stabbed and barely alive – a supposed case of murder-suicide. As her father lies in a coma in hospital, Sophie finds a letter from a publisher, delighted to accept her mother’s memoir.

Meeting the publisher only confirms what Sophie already believes, that her mother had everything to live for. But where are her mother’s notebooks, the script that the publisher has heard about but not yet read? And who promises to publish a manuscript from an unknown author sight unseen? Someone who is about to blow the lid on a cult, for one. For Nina, Sophie’s mother, had been a resident at Morningstar, run by the handsome and wayward ex-pop star, Aaron Kessler.

The novel follows Sophie’s investigations in search of the notebooks, her growing fears and suspicions that cult members may have had a hand in the attack on her parents. Woven in is Nina’s story, told in her own words – how she met the charismatic Aaron Kessler, and became spellbound. The story gives an excellent look at how mesmerising and bullying cults can be to anyone willing to believe; the drugs, rituals and rhetoric that make it difficult to be your own person.

Helen Callaghan has written another complete page-turner, and while it was easy to imagine the worst, and it so often comes to pass, there were still a few surprises in the story, though perhaps not as many as I might have hoped for.

Everything Is Lies is a welcome addition to the Chick Noir genre that is currently so popular, and Helen Callaghan has a particular talent for unusual plot scenarios. I shall be looking out for her next book for sure.

Catalogue link: Everything Is Lies
Posted by Staff at 13:20