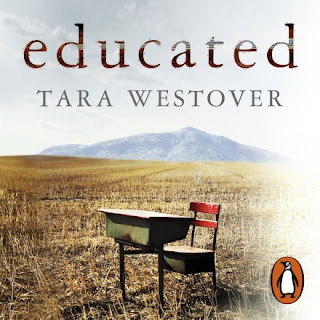 "As a child, I'd been aware that although my family attended the same church as everyone in our town, our religion was not the same. They believed in modesty: we practiced it. They believed in God's power to heal; we left our injuries in God's hands. They believed in preparing for the Second Coming; we were actually prepared." Tara Westfield.

To be truthful I nearly stopped reading Educated part-way through.
Tara's life with her End of Days fundamentalist Mormon family was so bizarre, there seemed little hope for her. Except the clue is in the title: Educated is a testament to the power of learning and self-determination in difficult circumstances.

Tara Westover's birth was never registered; she did not have formal schooling until she was 17, never went to a doctor or hospital and, as far as officialdom knew, she did not exist. Her mother was a midwife and herbalist without formal training; her father ran a junkyard (mostly staffed by his children and with conditions that would give a Health and Safety Officer conniptions). In later life Tara came to understand that her increasingly paranoid father was bipolar. Her older brother Shawn also became aggressive, manipulative and threatening toward her.

Tara's loyalty to her family and home in rural Idaho remained, even in the toughest of times. Ultimately her self-education then formal education took her away from her family as she rose above her difficult circumstances, yet they are unable to overcome their radical beliefs.

Such was Tara’s ignorance of worldly matters that she inadvertently isolated herself from staff and students at her first college by asking what the Holocaust was; an honest question from someone who just did not know (she also had no knowledge of World War 2, the Women’s Rights movement, or slavery). Incredibly, and with lots of support and hard work, Tara eventually gained qualifications from Harvard College and Cambridge University.

A well-written memoir from a remarkable woman who is probably lucky to be alive, let alone educated.