On Some Faraway Beach : The life and times of Brian Eno by David Sheppard 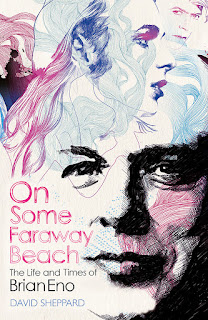 This is an in-depth look at Brian Eno’s extensive career. Now that David Bowie has returned to the stars it is worth looking at his contemporaries.

This biography starts in his early days with Roxy Music, moves to Brian’s solo albums, David Bowie, Talking Heads and later U2.

A sonic alchemist is what he is called, and that is an apt description. Brian Eno was for a very long time ahead of curve when it came to electronic sounds. He wasn’t the only one experimenting in this area of course, but from the beginning he gained a reputation for being able to add something to an album.

Whether this was a lot or a little, whether he was just a sounding board or someone to break the deadlock (or to move things along), it’s probably all lost in time.

Along the way he invented Ambient music, made art installations, and created albums with legends like John Cale, Robert Fripp and David Brynne; to note just a few.

He has been called a Renaissance Man and that’s a pretty big call, but he seems to have had a tireless work ethic, a near inexhaustible number of ideas, and the will to put those ideas into being. So maybe Renaissance Man isn’t far off.

Albums to check out:
Brian Eno : Here Come the Warm Jets or Before and After Science.
David Bowie : Low or Heroes
Talking Heads : Fear of Music or Remain in Light
U2 : Joshua Tree or Auchtung Baby

The Hastings Library has a large collection of Rock biographies please have a look at our catalogue for more information.

Catalogue link: On Some Faraway Beach
Posted by Staff at 09:00