Baking Fit for a Queen

For the first time ever, the Hastings Library Bakers Club happened online this month, and lots of people at home joined in. It seems baking is one of those things we all love to do, if only we had the time. Now we finally have the time! 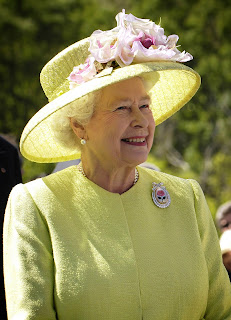 Each month we have a new theme at Bakers Club, and this month, it was “Fit for a Queen.” Despite our annual public holiday falling in June, Queen Elizabeth II’s birthday is actually on the 21st of April, and she turned 94 this year. Early June was her grandfather, King George V’s birthday.

Now, I’m a fly-by-the-seat-of-my-pants, eyeball-it, she’ll-be-right kind of baker. I measure my ingredients pretty roughly, and if I’ve reached the last of something, I’ll tip in the rest of it, or not bother to top it up with the last 30 grams. The markings on the oven in my flat wore off years before I moved in, so temperature is always a guessing game, and if something burns, I’ll just scrape off the blackened bits and eat it anyway.

So baking something fancy? Suitable for royalty? Not really my forte. A quick search online (never as satisfying as looking it up in a library book) tells me Her Majesty the Queen’s favourite cake is a chocolate biscuit cake (find the recipe here), but it sounds like far too much dark chocolate for my taste. (It turns out the queen and I probably wouldn’t get along if we flatted together; I love to pile on the garlic and onions, which is a big no-no in the Kensington and Buckingham Palace kitchens. However, at least we agree that strawberries are everything in summer, but shouldn’t be shipped in out-of-season).

Inspired by the deliciousness appearing on the Library’s Facebook page, I decided to try a favourite from my childhood. I had to ask Mum to send me the recipe. 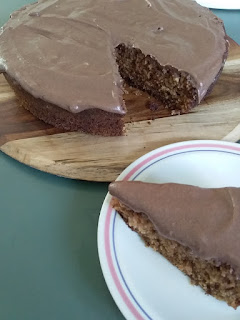 Cream butter and sugar with golden syrup and add beaten eggs. Sift in dry ingredients except baking soda. Warm the milk and mix baking soda in. Fold all together. Bake in round cake tin at 150C for 30-40 minutes.

I have spent hours researching the origin of this cake and why it’s called “Araby”, but to no avail. The best guess is that it’s an old European recipe given the name Araby because of the spices used, which would have come from the Arab region. The recipe came to my family through an elderly patient of Mum’s back in the early 1990s. She gave Mum a cake one week, and after bringing it home for us, Mum had to ask for the recipe the following week. If that patient were still alive now, she would be a good 15 years older than the queen. If it’s good enough for her, it’s good enough for the queen, I say. 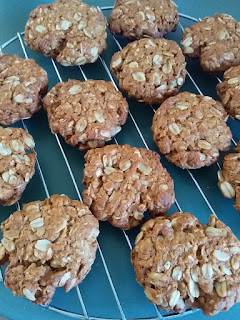 I also made the obligatory Anzac biscuits, too, using the tried and tested Edmonds cook book recipe.

Next month’s theme is “Go Global.” Our physical worlds have shrunk, but we still have access to international recipes, and our taste buds love to travel. What will you whip up?