Kiss the Girls and Make Them Cry by Mary Higgins Clark 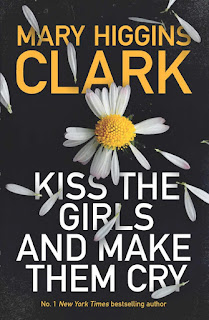 This is a ME TOO novel, that had me hooked from page 1.

Gina Kane, a freelance investigative journalist, receives an email eluding to a ‘horrible experience’ at a top television news network. This sets the scene for a psychological plot, with a sexual predator, of cover-ups, bribery, lies, corruption, financial fraud, greed, and murder.

This novel is written in three parts, first from Gina, the investigative journalist. Part two is written through the counsel, Michael Carter and the management of the television network perspective. The final part is written though both Gina and management.

Gina begins to investigate and tries to contact the woman from the email, then discovers the woman has died in a questionable accident. Gina finds out there are more women involved in this ME TOO scenario. She realizes she must give up her boyfriend as his work in making the network ownership go public is a conflict of interest. Her own safety is compromised as she and the private investigator she has hired discover more payouts and more ‘accidents’ and ‘suicides’. The women are all afraid of talking as network management and their lawyer try desperately to hide the extent of their news reader’s sexual harassment, and the financial fraud while conducting the women’s settlements.

The story comes to a dramatic head as all the lies, cover-ups and false blaming gets out of control, and finally the true murderer is revealed. The epilogue is a satisfying conclusion to this thrilling novel.

Mary Higgins Clark is called the “Queen of Suspense” and she did not disappoint with her final novel. Sadly, Mary Higgins Clark passed away on 31 January 2020 at the age of 92. She wrote 51 books some in collaboration with others. She will be sadly missed.

Catalogue link: Kiss the Girls and Make Them Cry
Posted by Staff at 15:49