The Scholar by Dervla McTiernan 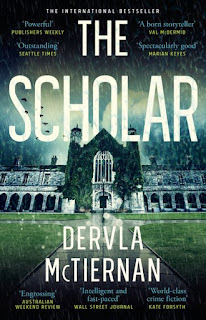 If you like detective stories or Irish settings, you’ll want to check out the DS Cormac Reilly crime novels by Dervla McTiernan. Set in Galway, a city on Ireland's west coast, the series follows Cormac, a talented detective who has returned to his old stomping ground with his partner, Emma Sweeney. She's a research chemist with Darcy Therapeutics, a big pharmaceutical company attached to Galway University.

The Scholar is the second in the series and begins when Emma finds the body of a young girl on campus - what looks like a hit and run. She calls Cormac who really shouldn’t be handling the case when he’s so close to a prime witness. The girl has an ID card that suggests she’s the grand-daughter of the company boss, John Darcy. But when Cormac visits the girl’s flat, Carline Darcy is alive and well and has no idea who the girl might be or why she's carrying Carline’s ID.

No students have been reported missing and it is only when a teenage boy calls into the police station worried about his sister that Cormac gets a break. Meanwhile, nobody is talking at Carline’s flat or Darcy Therapeutics, while suspicion hovers around Emma, who has had a brush with the law before. Cormac must not only solve the crime, but deal with increasing difficulties at the station – the smart new cop on the block who becomes the subject of gossip.

McTiernan writes a solid crime story, with plenty of suspects and mounting tension as the killer looks to strike again. The characters are well-drawn and believable and this helps drives the plot. And if you like an interesting setting, McTiernan fills in enough detail to add colour without slowing things down. The Scholar gives us much of the background to Emma’s story, hinted at in the first book, The Ruin. Both are engaging and intelligent novels and promise a series you’ll want to return to.

Catalogue link: The Scholar
Posted by Staff at 10:27