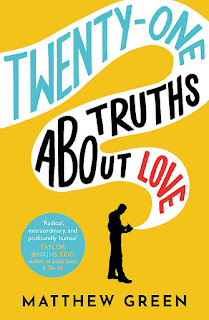 Twenty-One Truths About Love is a quirky, feel-good novel about Dan and his fear that he will lose Jill, the love of his life. Jill and Dan met as teachers at the same school. Skip forward a few years and they’re a devoted married couple now trying for a baby. The problem is that Dan left teaching to open a bookshop which is leaching money and he’s afraid to tell Jill they can’t afford a baby after all.

Through the book Dan becomes a simmering cauldron of anxiety, imagining that he comes up short against Jill’s previous husband, Peter, who was a good earner and (his trump card) died tragically young. Dan struggles with managing staff at his shop: the bossy, self-righteous Kimberley who thinks she should be manager; the sensible, good-guy Steve who should be manager but Dan is too nervous to ask him.

Meanwhile Dan counts the days he has not spoken to his father – the man who left the family when Dan was ten and who sends Dan letters he never opens. So yes, Dan’s a bit of a mess. As the months pass and there’s at last a baby on the way, Dan’s plight worsens and he thinks of increasingly absurd ways to earn a lot of money fast, building to a hilarious climax where, of course, Dan learns something about life as well as love.

Twenty-One Truths About Love is a book unlike any I’ve read before in that it is written as a series of lists. Dan’s therapist once suggested he write lists as a way of managing anxiety. Matthew Green creatively tells Dan’s story via the lists he keeps in his notebook. There are lists like: 'Reasons I Fell in Love with Jill' followed by 'Reasons I Wouldn’t Have Married Jill If I Hadn’t Fallen in Love with Her', giving a snapshot of the couple’s marriage.

If you think lists are a weird way to write a novel, think again. The plot is pacey, the pages fly by and somehow, Dan’s distinctive voice and his increasing desperation chime through. It is a dazzling accomplishment and well worth checking out if you’re eager for something a little bit different.

Catalogue link: Twenty-One Truths About Love
Posted by Staff at 11:25